Join us in the height of summer as we explore the beautiful Pacific Northwest.  We’ll be visiting Canada’s Gulf Islands before we head south to Puget Sound and Washington.  We’ll hike, explore some of the beautiful towns of the region, and keep a sharp lookout for wildlife.  Last year we saw humpback whales, orcas, porpoises, and seals.  If you’re interested in sailing but not sure if some of our longer voyages might be too intense, this trip is a good fit.  We’ll teach you the basics of sailing Sea Dragon while spending every night on anchor, day sailing and traveling in relatively flat water.

Sign up Now!  When you book, the $1000 deposit is non-refundable.  Please read our crew contract before booking.

As a first time participant, I really did not know what to expect. I must say, that each aspect of the journey was well thought out and adaptable to maximize developing conditions to enhance the voyage. The ship and the crew were impeccable and made me feel at home. Instruction and safety are obviously paramount to this organization and they do a great job at modeling their respect and love of the environment. I can without reservation recommend this experience to anyone with a love of sailing. 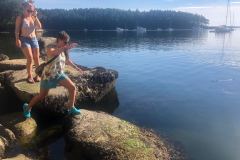 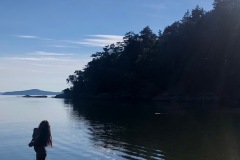 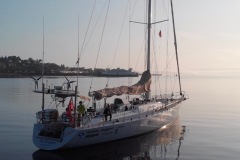 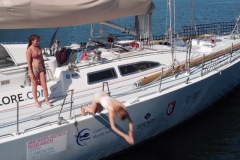 You’ll meet us on the dock in Victoria anytime between 1500 and 1700 and come on board to settle in. Everyone will come together for our first dinner on board, so we’ll all start to get to know one another. After dinner, your professional crew will go through life on board and safety procedures in prep for departure the following morning. You’ll be fitted with your own lifejacket and assigned foul weather gear if you haven’t brought your own.  We’ll stay the night on the dock.

Day 2:  To the Gulf Islands

After breakfast, we’ll drop lines and head off to our first destination, Port Browning on North Pender Island. With luck, we’ll see some of the wildlife in the area along the way before we anchor for the night.

After a quick swim in the morning and some time exploring ashore, we’ll up anchor and head to Poet’s Cove on South Pender Island. Here we can hike to the top of Mount Norman or beachcomb to our heart’s content for the afternoon.

After breakfast we’ll pick anchor and head south across the notorious strait of Juan de Fuca to Port Townsend, Washington. Upon arrival we’ll clear through US customs and immigration before having a hearty dinner and falling asleep to the lapping of the waves against the hull. We’ll spend the night on anchor.

After a lovely breakfast on the hook, we’ll head ashore for a day of fun – exploring downtown, hiking, or even going to nearby Fort Worden State Park. If you’re a boat aficionado, check out Port Townsend’s school of wooden boat building and the nearby yards where many of the classics of the Pacific Northwest are maintained. We’ll spend the night on anchor.

We’ll depart Port Townsend early and head south, anchoring in the afternoon off of Poulsbo. We’ll get a chance to check out the town or stay on board to enjoy being at anchor, perhaps reading a book in a hammock. We’ll spend the night here on anchor.

We’ll head south to Shilshole, just north of the historic Ballard locks. If the weather is nice we’ll have a beach picnic, watching the sun set over the Olympic Mountains after a day of ship-watching and sailing.

After a morning breakfast, it will be time to gather things and disembark  Sea Dragon  by 0900.  You’ll be in the perfect spot to explore Seattle further, especially the nearby locks and downtown Ballard.

Packing List
Kit: Temperate
Travel Details
You will join the boat in in Victoria between 1500-1700 on the first day.    You will depart the boat in Seattle at 0900 on the last day.

There are numerous ferries to Victoria from Seattle, Vancouver, and Tsawassen.    You can also travel via seaplane from Vancouver or Seattle, or fly Air Canada into Victoria International Airport (YYJ), which is about a 20 minute drive north of the city.  Seattle – Tacoma International Airport (SEA) is a 30-40 minute drive south of Shilshole marina, and is also an easy train journey into the city.

All crew members will require a passport and visas from their home country that will allow them to travel to/ from the USA and Canada.  Please note that many nationalities which can enter the US via cruise ship or airplane on the ESTA waiver program cannot do so on a private vessel.  If you are not a citizen of the US, Canada, or Bermuda you will likely need a B1/B2 visa for this voyage.  If you do not have a B1/B2, please contact us to discuss further before making any travel arrangements or making a deposit.   Please note that if you are not a US or Canadian citizen, you will likely need to complete a Canadian ETA prior to traveling.    Please ensure you have the appropriate paperwork completed before joining the vessel, or you will not be allowed to board.   Please look into the specific type of visa you need for arriving at these destinations by sea:    www.travel.state.gov/visa.

Molly was born in England in 2000, but family work took her to the beautiful west coast of Scotland in 2007 where she found my love for the sea and sailing. It’s always been a part of life; grandad lived on a boat in Sussex and her dad bought a boat which we sailed every summer around the Firth of Clyde.

During her time at Academy, she went on school trips to OYT Scotland, sailing on their Challenge 72’s and Oyster Ketch 70. When she left academy she volunteered with them while she was at college studying sound production but found that she would rather spend time at sea than in a studio, so Mo became OYT Scotland’s full time Cadet of 2017-18, getting her RYA Yachtmaster Offshore commercially endorsed and experience working with youth.

2018-19 took her through RYA Cruising Instructor and to sailing on bigger tall ships in Australia (Young Endeavour) and Sweden (Vega Gamleby.) Most recently she was back in Tasmania traveling and sailing on more ships.

Sailing is Molly’s life, she couldn’t imagine doing anything else.