If you’re looking for a taste of the cruising lifestyle, this trip has it all.  We’ll spend the first few days inshore exploring Canada’s Gulf Islands and Washington’s Olympic Peninsula while everyone on board gets comfortable with sailing and handling Sea Dragon. Then, we’ll head out the Strait of Juan de Fuca into the open sea for an 800 mile passage down the coast to San Francisco.  The weather could throw anything at us, but typically it should be a fast, fun downwind passage off the coast, full off migrating whales and dolphins.

Sign up Now!  When you book, the $1000 deposit is non-refundable.  Please read our crew contract before booking.

I never had sailed in Blue Water. If you are looking to experience this, then sailing on the Sea Dragon with Eric Loss and Shanley McEntee is a MUST!!! Very competent two some that made the trip memorable and enjoyable. 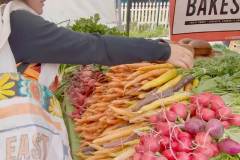 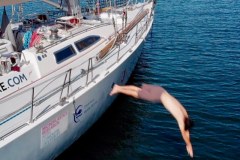 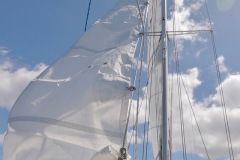 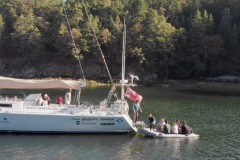 You’ll meet Sea Dragon on the dock in Vancouver at Coal Harbor Marina anytime between 1500 and 1700 and come on board to settle in. Everyone will come together for our first dinner on board and have the opportunity to get to know your fellow crew members. After dinner, your professional crew will go through life on board and safety procedures in prep for departure the following morning. You’ll be fitted with your own lifejacket and assigned foul weather gear if you haven’t brought your own. After prep, you’ll have free time to explore the city, read a book or simply hang on board the rest of the night. We’ll stay the night alongside the dock.

We’ll wake up and have a hearty breakfast before casting off the lines and heading out under the Lion’s Gate Bridge out of Vancouver to our first destination, Prevost Island. Against the gorgeous backdrop of mountains, we’ll set sail for our first sail. After finding our way through some of the Gulf Islands, we’ll arrive in the afternoon, and we’ll spend the night on anchor. There’s nothing like a wonderful meal on deck at anchor at sunset!

After a delicious breakfast, we’ll explore ashore, from the orchards to the point. We’ll land in the dinghy and hike from the beach out to the lighthouse overlooking Trincomali Channel. After a delicious lunch, we’ll pop around the corner to Bedwell Harbour, keeping an eye out for whales as we go. We’ll spend the night on anchor.

In the morning, we’ll pick anchor and head through the islands making our way to Port Angeles. It will be a bit of a longer sail than our first, but everything will start to feel quite familiar as we make our way. Hopefully we’ll spot some good wildlife and if we are lucky, see the resident pods of Orcas! We’ll arrive in time to clear customs and immigration into the US and spend the night alongside on the dock.

We’re much too close to the Olympic National Park to miss the opportunity of going for a rainforest hike before heading offshore for a few days. The possibilities are endless and there are options of hikes for all levels of difficulty. If this isn’t up your alley, take the opportunity to explore Port Angeles! We’ll spend the night alongside again.

We’ll sail out the strait of Juan de Fuca today, braving deadheads, fog, and fishing boats, to the wild tip of the continent, anchoring in Neah Bay.  Here we’ll get a chance to explore the Makah Indian Reservation and get fully prepared to brave the North Pacific.  On the dock for the night.

After breakfast, we’ll prep for going offshore and get off the dock before lunch. Settling into the watch and sailing routine, we’ll head out the Strait of Juan de Fuca to big blue. Fingers crossed once again for good wildlife viewing, as this region is full of it!

We will all find our rhythm to life at sea, and the days will fade in and out upon big blue. No two days, sunrises, sunsets or watches will be the same. Good food, great company, and hopefully many stars will carry us south toward San Francisco.

After coming under the Golden Gate Bridge and coming alongside, it will be time to disembark Sea Dragon by 1600. We’ll all say so long, but not goodbye, and you’ll find yourself free to explore beautiful San Francisco.

You will join the boat in in Vancouver  between 1500-1700 on the first day.    You will depart the boat in San Francisco  at 1600 on the last day.  Due to the vagaries of weather in the North Pacific, we may adjust our offshore passage timing – we could arrive as early as the 13th if weather demands us depart from the Pacific Northwest early.  If we arrive early, you are welcome to stay aboard until the 16th to explore San Francisco!

Vancouver International (YVR) is about 20 minutes away by car and also easily accessible by rail.  San Francisco International (SFO) is about 45 minutes by car or 1 hour by bus and train from Sausalito. Oakland International (OAK) is about 1 hour by either car or transit.  In addition, Amtrak has connecting service from downtown SF to it’s Emeryville depot, with trains to the rest of the country.

All crew members will require a passport and visas from their home country that will allow them to travel to/ from the USA and Canada. Please note that many nationalities which can enter the US by air on the ESTA visa waiver program need a B1/B2 visa to enter by sea.  If you are NOT from the USA, Canada, or Bermuda, you will likely need to get a B1/B2.  An ESTA may be acceptable for entry into Washington – please contact us for details. Please note that if you are not a US or Canadian citizen, you will likely need to complete a Canadian ETA prior to traveling.  Please ensure you have the appropriate paperwork completed before joining the vessel.  Please look into the specific type of visa you need for arriving at these destinations by sea:  www.travel.state.gov/visa.

After graduating from Bowdoin College, Eric became a PADI Divemaster while working for ActionQuest and Sea|Mester, developing his teaching skills as he progressed from running summer programs on 50’ yachts to skippering an 88’ and 113’ throughout the Eastern Caribbean and across the Atlantic. In 2011, Eric took a break from professional sailing to buy and refit Odyssey, an Islander 36, to attempt a non-stop solo circumnavigation. Eight months later, he returned to Los Angeles, having sailed past the Great Capes of the Southern Oceans and back up the Pacific to his home port.

Molly was born in England in 2000, but family work took her to the beautiful west coast of Scotland in 2007 where she found my love for the sea and sailing. It’s always been a part of life; grandad lived on a boat in Sussex and her dad bought a boat which we sailed every summer around the Firth of Clyde.

During her time at Academy, she went on school trips to OYT Scotland, sailing on their Challenge 72’s and Oyster Ketch 70. When she left academy she volunteered with them while she was at college studying sound production but found that she would rather spend time at sea than in a studio, so Mo became OYT Scotland’s full time Cadet of 2017-18, getting her RYA Yachtmaster Offshore commercially endorsed and experience working with youth.

2018-19 took her through RYA Cruising Instructor and to sailing on bigger tall ships in Australia (Young Endeavour) and Sweden (Vega Gamleby.) Most recently she was back in Tasmania traveling and sailing on more ships.

Sailing is Molly’s life, she couldn’t imagine doing anything else.