We’re excited to be partnering with QM Travels again this year.  We had an incredible voyage with Mitch, Quincy, and their team sailing from Vancouver to San Francisco in the fall of 2019, and this trip will be just as jam packed.  If you’re interested in joining, please contact QM Travels directly.

This trip should have some amazing sailing! Last year we averaged over 180NM a day on a tight reach north to Hawaii. We’ll depart Kiritimati and sail through the ITCZ to Tabuaeran (Fanning), a remote atoll of Kiribati.  Squalls and unsettled weather abound, but the region rewards careful boat handling with beautiful sunsets, rainbows, and the satisfaction of sailing fast in tough conditions.

If the researchers on Palmyra are “Living the Dream,” the inhabitants of Fanning are living the reality.  Approximately 2000 people live on this tiny atoll, which is supplied by ship only a few times a year.  There are charter flights to get here, but they are very unreliable and expensive.  When we visited last year, there were 5 Australian tourists on the island, but they were the first to visit in about a month.  The locals fish, farm, and enjoy life, sailing and racing traditional sailing canoes throughout the lagoon.  With a bit longer of a visit, we’re excited to explore the lagoon and surrounding reefs with some snorkeling missions in our tenders.

After a few days exploring this spectacular remote atoll, we’ll depart for almost 1000NM of close reaching through the trades. It’ll be fast, furious, and fun sailing until the green mountains of Oahu heave over the horizon to windward. These islands are truly remote, and the best way to get to them is by sea. Come with us and explore some of the Central Pacific’s gems before they’re gone.

This trip is an RYA Yachtmaster Ocean and IYT MOY Unlimited qualifying voyage – contact us to discuss!

A journey on Sea Dragon is an extra-ordinary experience that can take you to so many places, physically, mentally and spiritually … I’d do it again in a heartbeat.
– Andrew N.

“It’s extremely rare to find people who care so deeply and are also patient and extremely knowledgeable and generous in teaching on many things. It was a trip of a lifetime and I am profoundly grateful!”
– Crescentia W. 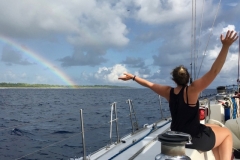 Welcome to Kiritimati! You’ll fly in and be met at the airport by the team from the Lagoon View Motel.  They’ll drive you the 40 minutes across the atoll to the pier where Sea Dragon is anchored. We’ll pick you up by dinghy and take you out to the boat. You’ll have time to find your bunk and get settled in before a general life on board and safety briefing from your Captain and Mate. You’ll be fitted with your own lifejacket, and if you didn’t bring foul weather gear with you, assigned a set. We’ll spend the night on anchor.

Today is the day to get a feel for the island. We’ll walk, we’ll swim, we’ll cook and go for a short day sail to familiarize everyone with Sea Dragon  before heading off the next day. There’s nothing like a sunset meal on anchor in a place like this!

After your first restful night on board, it will be time to get Sea Dragon ready to sail. After a hearty breakfast and clearing customs and immigration, we’ll up anchor and set our sails. We’ll fall into watches and settle in for our first night at sea under the gorgeous stars of the equatorial Pacific.

Welcome to Tabuaeran! We’ll make our way through the reef and anchor in the lagoon on this gorgeous atoll. Keep an eye out for all types of life from manta rays to sharks to dolphins! After clearing customs and immigration, we’ll relax after our passage and go for a swim. We’ll end the day with dinner on deck in this extraordinary location.

We’ll take full advantage of our surroundings over the two days on location, and exploration is the name of the game. A long walk on white sandy beaches, a snorkel over some of the best reefs in the world, and a visit with the local community. Another two nights on anchor in the lagoon.

After a special visit to a place you can only get to by sea, we’ll up anchor and head out of the lagoon when the light is favorable. We’ll set sail once again and point our bow towards Oahu as we settle in for our second passage.

We’ll have some nice fast sailing on our way to the lush volcanic Hawaiian Island chain. Fingers crossed we’ll be visited by dolphins, whales and endless sea birds. The warm tropical sailing will be quite the treat!

We’ll spot Oahu on the horizon farther out from land than when coming into Tabuaeran. We’ll keep our eyes peeled, and only the one with the eagle’s eye will be lucky enough to call “Land Ho!”.  Slowly, the island will get bigger and more detailed, until it’s time to drop sails outside the channel for Ko Olina Marina and head in to find our berth. While we wait to get cleared through customs and immigration we’ll tidy Sea Dragon.

After a night on the dock after passage, we’ll have a final breakfast together and wait to finish clearing through customs and immigration. Once the paper work is done, it will be time to disembark Sea Dragon at 1500. We’ll say so long to each other but not goodbye. You’ll be free to explore the tropical and volcanic Hawaiian Island chain as you wish on your own.

You will join the boat in in Kiritimati around 1700 on the first day.    You will depart the boat in Honolulu at 1500 on the last day.  Because we may not be able to clear through customs and immigration until the morning of this trip, please do not book flights for earlier than 1800 on the 15th.  Kiritimati is on the same time zone as Hawaii, but 1 day ahead, so you will be joining the vessel on June 2 Hawaii time, but June 3 local time.

Fiji Airways has one flight (FJ823) a week to Kiritimati (CXI) – it departs Hawaii the morning of June 9 and lands on Kiritimati that afternoon –  June 9 (Hawaii), June 10 (local).    We will organize ground transportation to the vessel from the airport – all travel must be pre-arranged, as there are no scheduled buses or taxis on the island.    Honolulu International Airport (HNL) is about a 30 minute drive from Ko Olina.

All crew members will require a passport and visas from their home country that will allow them to travel to/ from Kiribati and the USA. Please note that many nationalities which can enter the US by air on the ESTA visa waiver program need a B1/B2 visa to enter by sea.    If you are NOT from the USA, Canada, or Bermuda, you will need to get a B1/B2.   An ESTA is NOT acceptable for entry to Hawaii on board Sea Dragon. Please ensure you have the appropriate paperwork completed before joining the vessel, or you will not be allowed to board. Please look into the specific type of visa you need for arriving at these destinations by sea:    www.travel.state.gov/visa.

Having always been drawn to the outdoor world, Janos has spent much of his life sailing, travelling and in the mountains. Growing up near Glasgow in Scotland, the highlands and islands of the Scottish west coast were a playground from young age. After a few years of dinghy sailing he was drawn to bigger boats and the sea. This led to spending time volunteering with Ocean Youth Trust Scotland, where he learned to sail Challenge 72’s and started gathering qualifications from the RYA.

Janos went on to study Geography with Environmental Studies at the University of Edinburgh. The long summer breaks were used for trips to explore the Norwegian mountains and to sail in the Baltic Tall Ships Races. However, a few years of civilisation were enough, leaving him with itchy feet and yearning for the ocean. So after graduating in 2017 he embarked on an Atlantic Crossing, sailing from the Canaries to the Caribbean. Once ‘across the pond’ he travelled on to the US, where experiences in the Tetons and Yosemite have rekindled a passion for climbing and mountaineering. Since then he has qualified as an Outdoor Instructor whilst also pursuing his aspirations of becoming a Yachtmaster.

Mareike was born in Germany in 1992 and has been sailing full time since 2017. After graduating from university with a BA in Translation Studies, she decided to work on sailing boats rather than at a desk. Joining Anne-Margaretha in the Netherlands, she set off for a circumnavigation of South America, including trips to Antarctica and the Galapagos Islands. The following winter, she went to Maritime College in Enkhuizen (NL) to gain her Officer of the Watch certificate for sailing vessels up to 500GT. A season in Scotland and a summer expedition to the Arctic as a sail trainer on Ocean Spirit of Moray have given her additional teaching experience.

When she is not sailing, Mareike enjoys hiking and nature photography. She has walked long distance trails such as the O-Trek in Patagonia and the West Highland Way in Scotland. Always on the lookout for a new adventure, she will be joining Sea Dragon in Hawaii in 2020.