The greatest adventure you can have without years of training and experience – like climbing Everest without all the waiting in line. 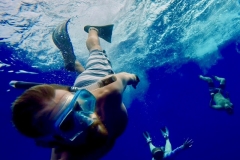 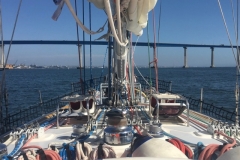 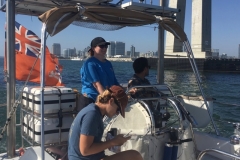 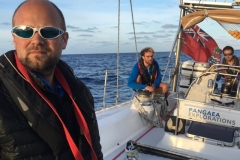 You’ll meet us on the dock in Chula Vista anytime between 1500 and 1700 and come on board to settle in. Everyone will come together for our first dinner on board and have the opportunity to chat with your fellow crew members. After dinner, your professional crew will go through life on board and safety procedures in preparation for departure the following morning. You’ll be fitted with your own lifejacket and assigned foul weather gear if you haven’t brought your own. We’ll spend the night on the dock.

Just after the sun rises, we’ll cast off the lines and head for the Channel Islands. Our first voyage will be an overnight passage to Santa Cruz Island. We’ll run watch teams and schedules for this hop, so you’ll have plenty of time to get a feel for being at the helm and for trimming the sails, while keeping an eye out for sea creature friends as we sail to Santa Cruz. We’ll sail under the stars all through the night.

From here on out, the schedule will depend on the weather.  A few must-dos will be a visit to the Painted Cave, snorkeling in kelp forests, and hiking ashore on various islands.  We’ll try to visit Santa Rosa, Santa Cruz, and Anacapa, and if the weather cooperates, we might even get to visit wind-swept San Miguel. These nights will be spent on anchor.

We’ll head back south, and depending on weather, may get the chance to stop at tiny, remote and inaccessible Santa Barbara Island.  If it’s too rough to land, we’ll continue on to Two Harbors at Catalina, where a tiny community has formed in the isthmus of the Island.  We’ll enjoy good hiking and great ice cream! We’ll spend the night on a mooring in Two Harbors.

We’ll spend the morning ashore, then set sail overnight for San Diego to clear customs and continue to Mexico.

We’ll check out of the United States early in the morning during our brief stop in San Diego, then head down the coast towards beautiful Ensenada, Mexico.  Keep an eye out for any early migrating whales – last year we saw humpbacks, greys, and even two blues!  Dolphins are also omnipresent as we head south and love to escort Sea Dragon through the waves.  We’ll arrive in Ensenada late in the afternoon in time to enjoy fish tacos and a cold beverage.

We’ll check into Mexican customs & immigration in the morning, then crew will be free to depart the vessel by 1300 hours.

All crew members will require a passport and visas from their home country that will allow them to travel to/from the USA and Mexico. Please ensure that you have the appropriate paperwork completed before joining the vessel or you will not be allowed to board.

Having always been drawn to the outdoor world, Janos has spent much of his life sailing, travelling and in the mountains. Growing up near Glasgow in Scotland, the highlands and islands of the Scottish west coast were a playground from young age. After a few years of dinghy sailing he was drawn to bigger boats and the sea. This led to spending time volunteering with Ocean Youth Trust Scotland, where he learned to sail Challenge 72’s and started gathering qualifications from the RYA.

Janos went on to study Geography with Environmental Studies at the University of Edinburgh. The long summer breaks were used for trips to explore the Norwegian mountains and to sail in the Baltic Tall Ships Races. However, a few years of civilisation were enough, leaving him with itchy feet and yearning for the ocean. So after graduating in 2017 he embarked on an Atlantic Crossing, sailing from the Canaries to the Caribbean. Once ‘across the pond’ he travelled on to the US, where experiences in the Tetons and Yosemite have rekindled a passion for climbing and mountaineering. Since then he has qualified as an Outdoor Instructor whilst also pursuing his aspirations of becoming a Yachtmaster.

Winter Maintenance
It’s the Most Wonderful Time of the Year